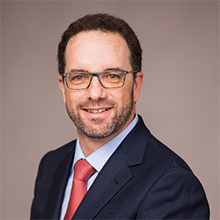 Dajani brings to this role a deep knowledge of multilateral development banks, a proven track record in corporate strategy and development, and a reputation for effective stakeholder engagement.  He has been widely recognized for his management skills and stewardship of policies and procedures within international financial institutions with a focus on strategy, ethics and governance.

Prior to this position, Mr. Dajani was Alternate Executive Director at the International Monetary Fund, a position he held since 2016. Previously, he served as Director General for Macroeconomic Analysis and International Finance at the Ministry of Economy of Spain. He has served on the Boards of Governors and Boards of Directors of several multilateral banks, including the World Bank, the Inter-American Development Bank, CAF-Development Bank of Latin America, and the African Development Bank. He was Spain’s chief negotiator for the establishment of the Asian Infrastructure Investment Bank and the Green Climate Fund.  He has also been a member of the economic policy committees of the European Union and the Organization for Economic Co-operation and Development (OECD).

As Chief Ethics Officer, Mr. Dajani directs the Ethics and Business Conduct Department, which promotes the development and application of the highest ethical standards by staff members in the performance of their duties. He provides overall strategic leadership on ethics and business conduct, ensuring that ethics and the Bank Group’s values are fully incorporated into the strategy of the entire World Bank Group. He reports directly to the President of the World Bank Group.​ ​​

Mr. Dajani, a Spanish national, has a Bachelor´s and a Master´s degree in Economics from Universidad Autónoma de Madrid. He speaks Spanish, English, French and Mandarin.