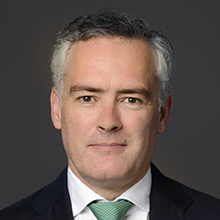 Jason Allford assumed duties as the Special Representative of World Bank Group (WBG)’s Korea Office in August 2021. The WBG Korea office includes staff of the World Bank, International Finance Corporation (IFC), and the Multilateral Investment Guarantee Agency (MIGA). In this role, Mr. Allford oversees the office as a global hub on innovation and technology for sustainable development, bringing lessons from Korea’s development experience – particularly in relation to innovation, technology, and green growth – and applying them to the World Bank’s operational work in other World Bank member countries.  The office, which links Korean public and private sector partners with other parts of the World Bank Group and with counterparts in other countries, was established in Songdo, Korea in 2013.  The Korean Government and the World Bank Group renewed their support for the office and its role in the World Bank’s work program for the third time in July 2021.

An Australian national, Mr. Allford joined the Australian Government in 1994, focusing on macroeconomic analysis, forecasting and fiscal policy. He previously worked at the World Bank Group from 2014 to 2018, representing 15 countries from Asia and the Pacific including Korea at the Bank’s Board of Executive Directors.  He has also worked as an adviser on fiscal policy to governments in Africa, East Asia Pacific, Eastern Europe, and the Middle East. Mr. Allford holds a Master’s degree in Economics from the London School of Economics and Political Science and a Bachelor’s degree in Economics from the University of Tasmania.