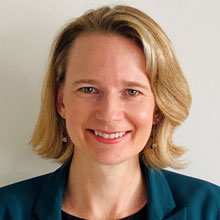 Benner, a United States national, joined the World Bank in 2009 as Project Coordinator for the 2011 World Development Report on Conflict, Security and Development.  She has since held various positions, including Senior Operations Officer with the Fragility, Conflict and Violence Group where she served as Program Manager for the US$240 million State- and Peacebuilding Fund, Korean Trust Fund for Transitions, and United Nations-World Bank Partnership Trust Fund.

Most recently, Benner has served as Senior Social Development Specialist in the Social Sustainability and Inclusion Global Practice for Eastern Europe and Central Asia.  In Ukraine, she has led preparation of the World Bank’s first investment in conflict-affected Eastern Ukraine, ‘Eastern Ukraine: Reconnect, Recover, Revitalize Project’ (US$100 million). In Turkey, she has co-led the ‘Social Entrepreneurship, Empowerment and Cohesion in Refugee and Host Communities in Turkey Project’ (US$46 million). Benner has also led regional programs in Central Asia that combine energy infrastructure investments with community-based development.  She has contributed to programs that promote citizen engagement, youth employment, inclusive service delivery, and gender across the region.

Prior to joining the Bank, Benner worked with the Brookings Institution, U.S. Department of State, U.S. Agency for International Development, and various non-governmental organizations.  At Brookings, Benner managed a Project on transnational threats and reform of the multilateral system. At U.S. Department of State, she authored an interagency conflict assessment methodology and served as a Conflict Advisor in the U.S. Embassy in Kathmandu, Nepal. While with Seeds of Peace, she led dialogue programs for youth from conflict regions including the Middle East, Cyprus, and the Balkans.

Benner holds a Master’s Degree in Conflict Resolution and Post-Conflict Peacebuilding, Development Economics, and Comparative Political Analysis from the Fletcher School of Law and Diplomacy at Tufts University; and a Bachelor’s Degree from Colorado College.