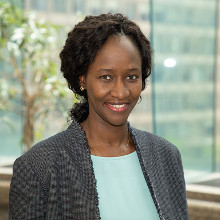 Hawa Wagué is the Resident Representative for the World Bank in Togo.

Mrs Wagué, a Mauritanian national, joined the Bank in 2002 as an economist in the Poverty Reduction and Economic Management Unit in Mauritania’s country office. She has since held various positions, including senior country economist for Nigeria and as senior economist in the Credit Risk Department. Mrs Wagué also worked as a senior analyst within the Fund Management Department of Bank of Canada.

As resident representative in Togo, Wagué plans to strengthen the partnership between the Bank and the country through a sustained dialogue with the national authorities, donors and civil society. She also plans to play a strategic role in the implementation of the Country Partnership Framework.