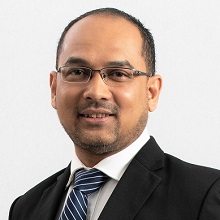 Prior to this posting, he has served the Federal Treasury for more than 20 years in the economic and fiscal areas. He served as the Deputy Under Secretary and Head of Fiscal Policy Office in the Fiscal and Economics Division of the Ministry of Finance (MoF) in Putrajaya, Malaysia. He held numerous positions in the Ministry of Finance including the Head of the Debt and Risk Section; Senior Principal Assistant Secretary in the Balance of Payments Unit and lead special tasks such as formulation of the national Budget, establishment of Urban Transformation Centre (UTC), and issuance of global sukuk. He also served as panellist and presenter in various international platforms.

Mohd Hassan Ahmad holds a Master of Economics degree from the University of Sydney in Australia, a Bachelor of Accountancy degree from the University Putra Malaysia, Malaysia and a Diploma in Public Management from the National Institute of Public Administration, Malaysia. He is a chartered accountant and a member of Malaysia Institute of Accountants (MIA).