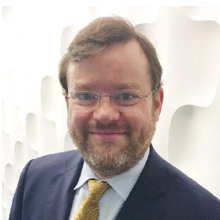 Prior to his appointment as Director, he was Head of Capital Markets since joining the Capital Markets group of the World Bank Treasury in August 2006. He led the team responsible for the Bank’s plain-vanilla debt products, including global bonds and local currency bond issues in new markets.

Before joining the World Bank, he was Executive Director at Goldman Sachs, heading the Sovereign, Supranational, and Agency Debt Origination group based in London. He also has previous experience as a commissioned officer in the United States Navy and flew reconnaissance aircraft.

He holds an MBA from Boston University, and degrees in Finance from London Business School, and Aeronautical Engineering from the Ohio State University.