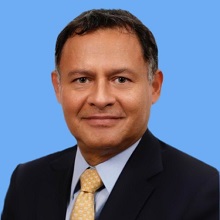 Ernesto Acevedo, a Mexico national, is the World Bank Group Executive Director representing Costa Rica, El Salvador, Guatemala, Honduras, Mexico, Nicaragua, and Spain since November 2022. Prior to this position he was Alternative Executive Director to the same constituency from April 2021 to October 2022.

Mr. Acevedo has more than 20 years of professional experience in finance and economics, in both the public and private sector. Prior to joining the WBG Board, Mr. Acevedo held several senior positions in the Ministry of Economy, such as Vice Minister of Industry, Commerce and Competitiveness, Chief of Staff and Chief Economist. At the Ministry of Finance and Public Credit he held numerous leadership positions such as Director General of Productivity Analysis, Director of Macroeconomic Analysis, Director of Economic Policy, and Director of International Economic Studies. Earlier in his career, he served at the Federal Telecommunications Commission as economics advisor.

He has published several papers in specialized economic journals about potential GDP, business cycles, productivity, inflation and economic growth, among other topics.