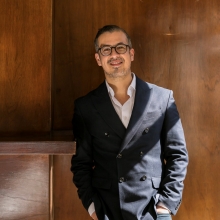 Christian De la Medina Soto co-leads the EQOSOGI initiative. He joined the World Bank Group in January 2013 and has been part of the Sexual Orientation and Gender Identity (SOGI) Core Team since 2018. He is also currently working on the Investment Climate Unit of the World Bank. Prior to joining the Investment Climate Unit and the SOGI Core Team, he worked on several projects at the World Bank, including Investing across Borders; Women, Business and the Law; and Benchmarking Public Procurement. He has worked in the Financial Inclusion department as a foreign legal specialist at the Public International Law & Policy Group, as a foreign legal consultant at the Legal Department of the Inter-American Development Bank, and at Tobin & Munoz Firm and Moarbes, LLP, in Washington, DC. He also clerked for the Mexican Federal Court for over six years.

He holds a master’s in international legal studies from American University, Washington College of Law (LL.M.); a master’s in political science from El Colegio de Abogados de Madrid, Spain; and a law degree from Anahuac University in Mexico. He is bilingual in Spanish and English and has a working knowledge of French, Italian, and Portuguese.