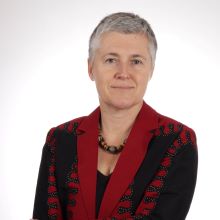 Carine Clert, a French national, is the World Bank Country Manager for El Salvador and Costa Rica, based in San Salvador.

In the last 20 years, throughout her career at the World Bank, Carine has been leading and contributing to operational programs and analysis on policies against poverty and social exclusion in various parts of the world, including Latin America, Eastern Europe, and the Middle East and North Africa (MENA, English acronym).

She has also held positions in the area of Social Development in the Europe and Central Asia region, in the global office of the Vice President of Sustainable Development; and was the Human Development Sector Leader for the Latin American and Caribbean region, based in Peru.

Carine joined the World Bank in 2000 as part of the Young Professionals Program to work in Social Development in the Latin America and Caribbean region.

Before joining the Bank, Carine advised the Government of Chile on inclusive poverty reduction policies and was a Senior Lecturer in Social Policy at the London School of Economics.

She has a PhD in Social Policy from the London School of Economics.