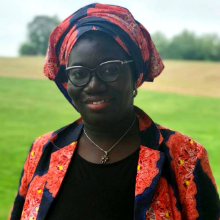 Arame Tall is a Senior Adaptation & Resilience Specialist in the Climate Change Group of the World Bank. Before joining the Bank in 2017, she worked for 15 years in climate adaptation and development, holding senior positions with the World Meteorological Organization (WMO), the CGIAR Research Program on Climate Change, Agriculture and Food Security (CCAFS) and the Red cross/Red crescent Climate Centre.

Dr. Tall leads coordination of the Bank’s work on Adaptation & Resilience and is the team leader for the World Bank Group’s first of its kind Action Plan on Climate Change Adaptation & Resilience. The new plan significantly boosts support for adaptation and resilience, and also represents significantly ramped up ambition from the World Bank Group in this area.

Before joining the Bank Group, she was with the World Meteorological Organization (WMO)’s Global Framework for Climate Services (GFCS) based in Dakar Senegal, where she managed the Regional office for Africa supporting all of Africa’s 53 governments with policy guidance to mainstream adaptation and establish effective national/regional frameworks for climate services. From 2012-2015, she worked as a senior climate services scientist and champion at the CGIAR Research Program on Climate Change, Agriculture and Food Security (CCAFS), based at ICRISAT in India, then IFPRI in Washington DC, where she spearheaded among many more achievements several programs to scale up the delivery of climate information services for millions of smallholder farmers in Africa, South Asia and Latin America. Prior to that, she was with the Red Cross International Federation where she served as regional technical adviser for West and Central Africa for several years, scaling up their on-ground capacity for effective climate-related disaster risk management.

With over 15 years of work experience at the interface of climate & society, Dr. Tall is one of the world experts on climate services, adaptation, resilience and community-based early warning systems, widely published on research at the nexus of climate science and societal benefits. Some of her recent publications include: “Scaling up climate services for smallholder farmers: Learning from practice”, “Do climate services make a difference?”, “Reducing vulnerability to climate-related disasters: A Qualitative Assessment of Disaster Management Policies across Africa, Demonstrating Heterogeneity”, “Scaling up Climate Services for Farmers > Mission Possible: Learning from good practice in Africa and South Asia” and “Towards forecast-based humanitarian decisions: Climate science to get from early warning to early action”.

She holds a PhD from the Johns Hopkins University-SAIS in Climate Adaptation and African Studies, an MA from Columbia University’s Climate & Society Program, and a BA from Smith College in Anthropology and Environmental Policy.