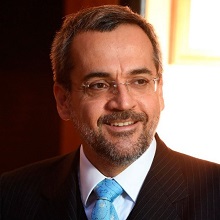 Mr. Weintraub was one of the first members of President Jair Bolsonaro's campaign team, responsible for drafting the Government Plan and the proposal for the New Pension Plan in Brazil.

In November 2018, he was the Executive Secretary (Deputy Minister) of the transitional government and on January 1, 2019, he took the same position at the Chief of Staff Office. Three months later, on April 8, he was appointed Minister of Education.

Mr. Weintraub has over twenty years of experience as an executive in the financial market, acting as Chief Economist and Director of Votorantim Bank, as well as CEO of Votorantim Stockbroker in Brazil and Votorantim Securities in the United States and England. He was also a partner of Quest Investments, member of the BM & FBovespa Trading Committee, and the Macroeconomics Committee of the National Association of Financial Market Institutions.

Mr. Weintraub holds a degree in Economics from the University of Sao Paulo (1994) and a Master's degree in Administration, in the area of Finance, from the Getúlio Vargas Foundation (2013).