Turkey: Transforming Health Care for All 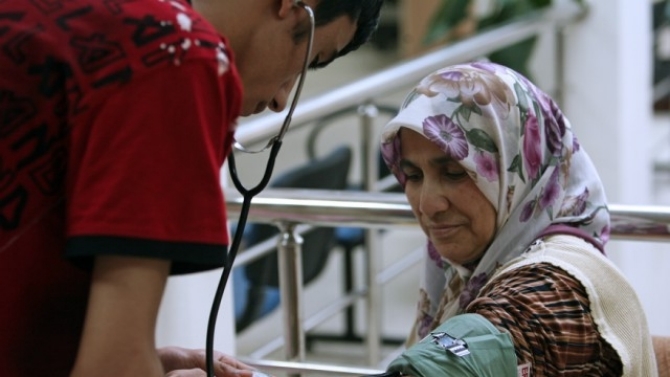 Achieving the Sustainable Development Goals to end extreme poverty by 2030 will require about $4.5 trillion annually, far more than multilateral development banks or donors can provide by themselves. To face this challenge, the World Bank Goup adopted the MFD approach, which entails working with governments to crowd in the private sector while optimizing the use of scarce public resources. This approach is guided by the Hamburg Principles adopted by the G20 in 2017 and builds on the substantial experience across the institution.

The Turkish Government is transforming its healthcare sector so that all its citizens have access to quality services. To do this, it is partnering with the private sector on a major program to improve the country’s hospitals and healthcare infrastructure. The World Bank Group is providing support at several levels. These include advising on reforms, regulations, and institutions that govern healthcare, and stimulating private investment in partnership with other multilateral development banks.

In 2002, Turkey faced a health care system plagued by inefficiencies and widespread dissatisfaction. Infant mortality rate stood at 26.1 per 1,000 live births and less than two-thirds of the population had health insurance, resulting in unequal healthcare access among different population groups. In response, the government initiated the Health Transformation Program (HTP), with World Bank Group support, to completely overhaul the health system. Its main aim was to provide universal access and coverage to healthcare, an effort that included upgrading the country’s healthcare infrastructure and aligning capacities towards specialized services such as cardiology or oncology.

The public-private partnership (PPP) program was an important tool for the Ministry of Health to improve healthcare access and quality and to sustain the achievements of the HTP. This would harness private-sector resources to upgrade the infrastructure and technology in many public hospitals. In addition, a more robust regulatory framework and greater institutional capacity was needed to support private operators, extend health insurance to the entire population, and attract potential investors with global expertise in the sector.

Setting Up the Regulatory and Institutional Capacity

Building on its prior reform work, the World Bank provided technical assistance that led to amended legislation and regulations. As a result, more private firms entered the health insurance market. It also led to more financial and managerial autonomy for all public hospitals, growth in the number of private hospitals, and a realignment of capacities towards more specialized services.

As part of the World Bank Group, the International Finance Corporation (IFC) attracted complementary private sector investment for upgrading the country’s public hospital network. Between 2004 and 2015, the World Bank provided two APLs to support the implementation of the HTP. In 2015, it provided a new loan that included activities to strengthen the government’s capacity for managing and monitoring the broader PPP program. The European Bank for Reconstruction and Development (EBRD) also approved a €800 million framework to support the PPP program.

IFC monitored the PPP program, which began in 2010, engaging early on with sponsors, financiers, and Turkish counterparts. This support enhanced the bankability of concession agreements and catalyzed long-term commercial financing that was not available in Turkey. IFC directly financed $240 million and mobilized $430 million from other lenders in support of four pioneering projects under the program—all of which received various international project finance awards. IFC also worked extensively with the Ministry of Health to align contract structures with international good practices, establishing models that have enabled subsequent projects to attract additional investors.

MIGA provided $816 million in political risk insurance which mobilized $763 million of private capital to support six projects within the hospital PPP program, two of which were implemented jointly with IFC. In the Elazig Hospital PPP, MIGA provided $326 million in political risk insurance to protect bond and equity investors from political risk, while EBRD provided €89 million in liquidity facilities. This support was effective in de-risking the transaction, as reflected in Moody’s Baa2 rating, which was rated above Turkey’s sovereign debt rating. In parallel, IFC invested €80 million in the project bond.

The combined World Bank Group financing structures in partnership with EBRD helped mobilize several companies and banks to become first-time investors in Turkey. To date, over 10 projects have reached financial close and are at various stages of implementation. Three projects are already operational.

The Health Transformation Program led by the Government of Turkey since 2003 has contributed to improved health, enhanced fairness in financing, better financial protection, and increased user satisfaction. In 2012, healthcare access for the Turkish population reached 98 percent, resulting in visible improvements in health outcomes. Infant mortality rates halved, from 26 to 12 per 1,000 births, and life expectancy grew to 74 years. Outpatient physician visits per capita more than doubled, growing from 3.1 visits annually in 2002 to 8.2 visits in 2013. Most achievements were a direct result of productivity gains in service delivery and broader patient-centered health sector reforms undertaken during the initial phase of the HTP.

The World Bank Group’s expertise ensured that the PPPs were set up in a way that allowed the government to maximize financing for the health sector for the benefit of its citizens. The close collaboration of the World Bank, IFC, and MIGA—the World Bank Group’s “umbrella effect”—mitigated risks for investors and contributed to the success of the PPP projects. This in turn led to improved public hospital infrastructure, more efficient operators, and ultimately, better and measurable health outcomes.

The World Bank supported the design of a landmark health infrastructure program with, between 2004 and 2015, two Adaptable Program Loans (APLs) totaling $135 million, and in 2015, a $134 million loan to support the Ministry of Health to continue implementing reforms in the health sector.

IFC provided $240 million in loans and mobilized $430 million to build and operate four hospitals from other lenders.